Click EBooks or on the grey box above to see all Deric's titles available.

More are being prepared in 2015 from his live Sports broadcasts for BBC Radio Derby and Nottingham in the mid 1980s. 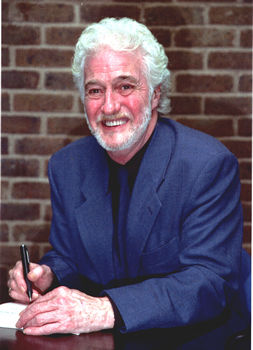 Deric Longden was born in Chesterfield in 1936 and married Diana Hill in 1957. They had two children, Sally and Nick. After various jobs he took over a small factory making women's lingerie, but began writing and broadcasting in the 1970s and before long he was writing regularly for programmes like 'Does He Take Sugar?' and 'Womans Hour'. Most of his work was based on his own experience. The demands made on him by Diana's illness, subsequently believed to be a form of ME, forced him to sell the factory, and since then he has devoted himself to full-time writing, broadcasting, lecturing and after-dinner speaking.

Diana’s Story, published in 1989, some years after Diana's death, was a bestseller. The book hit the Sunday Times best seller list straight away, won the NCR book award. It was voted the most loved serial in 50 years on BBC Radio 4 Woman's Hour.

It was followed by Lost for Words, The Cat Who Came in from the Cold, Enough to Make a Cat Laugh, I’m a Stranger Here Myself, A Play On Words and Paws in the Proceedings. Deric Longden's first two books were adapted for television under the title Wide-Eyed and Legless, and an adaptation of Lost for Words. Both were nominated for multiple BAFTAs and Lost For Words, screened in January 1999, attracting an audience of more than 12 million viewers and won the Emmy for best foreign drama and a BAFTA for Thora Hird as best actress.

He married the writer Aileen Armitage in 1990 and lived in Huddersfield. Aileen and he were jointly were awarded honorary Doctor of Literature from Huddersfield University in 2004 and Deric a honorary Master of Letters from Derby University in 2006. Aileen is Bibliophile owner Annie's mum and her dear step father Deric died 23rd June 2013. Read The Daily Telegraph Obituary here.

A beautiful quote from ME awareness

The recording from Woman's Hour