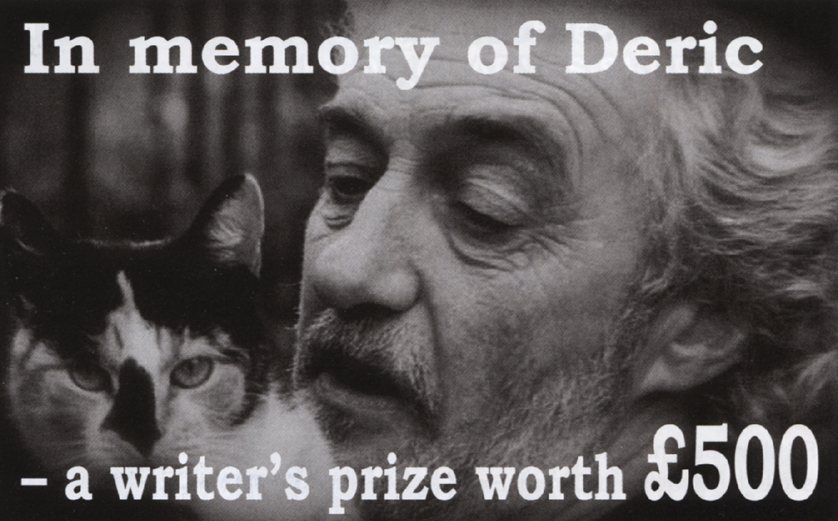 The Writers Summer School in Swanwick, Derbyshire has played host to many writers. Past speakers have included; Iain Banks, Ruth Rendell, PD James, Norman Wisdom, Terry Pratchett, Colin Dexter and Deric Longden. Deric was from Derby and met his second wife, author Aileen Armitage at the annual writing event. He had been sent to interview her for Radio Derby and became a regular speaker himself and together with Aileen, helped guide many budding writers.
Now the Swanwick Writers’ School together with the ME Association and Bibliophile Books are creating the Deric Longden Memorial Prize. The 500 word short story completion will be awarded to the writer/carer who, like Deric, has a witty way with words and is fulfilling the role of carer to a friend or family member for love rather than financial reward.
It is fitting that Deric is being remembered in this way having started writing by entering a short story competition himself. Through wining the competition, not once but twice, he becoming part of the BBC Radio Derby broadcasting and journalist team. He then went on to become a bestselling author, speaker, screenplay writer and win an International Emmy for his screen adaptation of his book ‘Lost For Words’ and Dame Thora Hird a Bafta for her portrayal of Deric’s Mum. It is also fitting that the ME Association are sponsoring the award in recognition for the profile Deric’s first book ‘Diana’s Story’ had in raising the awareness of ME. Diana’s Story’ was about Deric’s first wife’s severe ME and the story was turned into the BAFTA nominated TV drama ‘Wide-Eyed and Legless’. Deric’s reading of it was voted by Radio Four’s ‘Woman’s Hour’ listeners as the most popular serial in 50 years.

Your entry can be on any theme you choose. Just bring a humorous slant to it, as Deric did on life in general. He once broadcast a radio obituary to a long-serving role of clingfilm called 'Eric' when it finally delivered its final sheet!
Good luck.

Age and caring relationship: Entrants must be aged 18 or over and fulfilling the role of an unpaid carer for a friend or family member. Please be sure to tell us who you are caring for and your relationship to that person.

Entry fee: £5 (cheque payable to ‘The Writers’ Summer School’ or by online payment direct to the school’s bank account). We can give you those bank details on application.

Closing date and where to send your entry: Post your entry to ME Essential, 60 Broadgate, Weston, Spalding, Lincolnshire PE12 6HY to arrive by midday on Friday 2 May 2014. Typed entries only please, in double spacing, with a front cover sheet including your name, address and email. All initial inquiries to Tony Britton, email: tony@meassociation.org.uk

Judging: Entries will be judged by a small panel set up by the Writers’ Summer School in association with Deric’s family.

Prize: A fully inclusive week worth about £500 at the 2014 Writers’ Summer School in Swanwick, Derbyshire, from August 9-15, including all meals, en-suite accommodation and access to the renowned programme of courses, speakers and evening entertainment during the week.

The programme for next year’s summer school is still being arranged. Watch their website for further details: www.swanwickwritersschool.co.uk

Aileen Armitage will be guest speaker on Monday August 11 and will be joined by her daughter Annie Quigley and son-in-law Martyn. They are looking forward to awarding the prizewinner with a commemorative certificate.

We once asked Deric how he started writing and his answer below reflects his witty view of life?
I always wanted to write but never did anything about it other than little bits and pieces for my own pleasure. Then in 1974 BBC Radio Derby ran a five hundred word short story competition. Each entry had to be submitted under a pen name and so I called myself ‘Biro’, which I thought was a pretty good pen name.
My story was about a hundred year old man who put his great age down to the fact that he had always lived in a house without an outside lavvy. It kept you on your toes, he said. There was no easy trot upstairs like when you have one inside.
You never quite knew when the urge would come over you and you’d have to gather together your packet of twenty Capstan full strength and your box of matches. Grab the Daily Mirror from under the dog, slip the lavvy key off the hook and then vault the old wooden gate as you sprinted some thirty five yards up the garden path in the pouring rain. You could never relax for a moment.
Somehow I won and the following year I entered again, this time under the pen name ‘Papermate’. I wrote a story about a shepherd who only had two sheep and rather than leave them out on the lonely moors at night, he would take them home with him.
Most shepherds dip their sheep only once a year, but he was able to do it once a week because fortunately he had a double draining sink unit. Afterwards he would pop them into the tumble drier – for forty five minutes on woollens.
I won again and the following year went for the hat trick. A week after I had posted my entry the producer rang me.
‘Are you by chance Parker 51’?
I said that I was and he told me that I looked like winning again and made me an offer I couldn’t refuse.
Two and half thousand broadcasts later I wince slightly when I look at the stories now, although if I’m honest with myself, I smile as I wince.

Bibliophile has already digitally published a collection of Deric’s cat short ‘Tailpieces’ as well as republishing his books in digital form. We are now working on four more digital collections, which will cover his anecdotal and witty Radio Derby scripts which cover over 20 years of broadcasting.

The titles are to be Radio Times Series 1-4 by Deric Longden.